Total of 13 companions are available for the players in Fallout 4. each of them except for Dogmeat reacts to the fallout player’s decisions with either an approval or disapproval. If the player reaches maximum affinity they unlock a special perk that will boost the his performance. Additionally, fallout 4 companions can be romanced if the player so chooses when he reaches maximum affinity; this also allows the player to access his Lover’s Embrace, which thus increases their experience gained, for a short time when he sleeps on bed near their lover. so here are 13 fallout 4 companions,their perks, likes, dislikes and location for players-

fallout 4 companions will accompany you always.

Where to Meet Codsworth: He’s in Sanctuary at the beginning of the game.
Companion Perk: Robot Sympathy – Grants +10 Damage Resistance against energy attacks from robot enemies. Highly specific, eh? Overall one of the weaker perks here but Codsworth is fairly easy to please.

How to Increase Affinity: Codsworth praises nice and generous behavior, but isn’t too fond of selfishness and chem use/addiction.

Where to Meet Preston: Museum of Freedom, in Concord. He’ll join after The First Step which is after When Freedom Calls
Companion Perk: United We Stand – Deal +20{759ea7cc040b739ccdea57f6f3bf580aa9a47671a197b25f0707fbadbb7abadd} damage and gain +20 Damage Resistance any time you’re fighting 3 or more enemies (which is almost always). Obviously it’s a very strong perk, particularly early in the game when +20 DR really matters, though the damage boost is the main draw here. As much as people hate on Preston, they should probably grab this one then send him off to a farm they rarely visit if they don’t want his quests.

How to Increase Affinity: Garvey is a fan of decisions that are generous, mean, and peaceful. But he’s most happy with you if you keep building settlements throughout the Boston wasteland. However, he doesn’t tolerate violent and selfish decisions as well as chem use/addiction.

Where to Meet Valentine: Do the Quest Getting a Clue, he is in Vault 114 which is found following the main quest from Diamond City.
Companion Perk: Close to Metal – Gives you one more chance at hacking terminals, while also reducing the time for a terminal to reset by 50{759ea7cc040b739ccdea57f6f3bf580aa9a47671a197b25f0707fbadbb7abadd}, bringing it down to 5 seconds. Why bother with rank 4 of hacker when you could have this!

How to Increase Affinity: Valentine likes nice and mean behavior, but not the in the extreme.

Where to Meet Piper: Diamond City, she’ll be at the entrance. Complete the Story of the Century Quest to befriend her.
Companion Perk: Gift of Gab – You’ll get double XP for discovering new locations and successful Charisma speech checks. A useful Perk to get early in the game, but will help you to level regardless of when you get it. If you are looking for 2k18 locker codes then grab from here. fallout 4 companions are found in game.

How to Increase Affinity: Piper admires generosity but also appreciates it if you’re mean and assertive from time to time. She doesn’t like peaceful or violent behavior.

fallou 4 companions will accompany you always.

How to Increase Affinity: Deacon appreciates kindness but isn’t against mean behavior. He’s not fond of violent decisions and chem use/addiction.

How to Increase Affinity: Curie likes nice, peaceful, and mean behavior. However, she cannot stand selfishness and chem use/addiction.

Where to Meet MacCready: Goodneighbor – inside The Third Rail. Hired for 200-250 Caps.
Companion Perk: Killshot – Adds a flat +20{759ea7cc040b739ccdea57f6f3bf580aa9a47671a197b25f0707fbadbb7abadd} to hit an enemy’s head in VATS. Super-potent in combination with the Sniper Perk, which also stacks additively, meaning you can make headshots at great distances. This + Deacon’s Cloak and Dagger Perk are incredibly potent together in a sniper build.

How to Increase Affinity: Strong appreciates generosity and peaceful decisions. But given his Super Mutant nature, he also doesn’t mind the occasional violence. He isn’t a fan of modification or anything involved with the Brotherhood of Steel.

Where to Meet Paladin Danse: Cambridge Police Station, save some Brotherhood soldiers then complete Tour of Duty
Companion Perk: Know Your Enemy – A great perk – deal +20{759ea7cc040b739ccdea57f6f3bf580aa9a47671a197b25f0707fbadbb7abadd} damage to ghouls, mutants, and synths. The hatred of all things foreign is strong in you! The quest Blind Betrayal (which comes up in the BoS quest chain) is required to get this Perk.

How to Increase Affinity: Danse generally likes kindness towards others and dislikes you if you’re too mean or peaceful. He is also in favor of violent decisions when its for the cause of Brotherhood of Steel. If you join his faction, completing its missions and increasing its reputation will also win you brownie points with him.

How to Increase Affinity: While Hancock dislikes mean and selfish behavior, he has no qualms with violence. Additionally, he appreciates it when you act generously towards others.

How to Increase Affinity: Cait appreciates violent and selfish behavior, but doesn’t tolerate decisions that are generous, peaceful, or mean. She starts out supportive of chems but isn’t happy with their use over time. 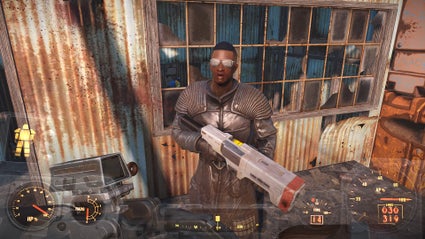 Where to Meet X6-88: Do the main quest, join the Institute and finish their chain to the point of Mankind-Redefined.
Companion Perk: Shield Harmonics – Gain +20 Energy Resistance. Like Codsworth’s Perk, only not as specific and double the value. It stacks with it, however, and will give you +30 against Robotic opponents such as Assaultrons.

How to Increase Affinity: X6-88 favors peaceful and selfish behavior, but does not like kindness and generosity.

Dogmeat is a dog. He has powerful search capabilities and can often locate hidden items. Dogmeat can also hold and pin enemies.

Affinity Perk: Attack Dog — Dogmeat can bite and hold on to enemies, potentially causing them status ailments, such as bleeding or crippling a limb.

How to Increase Affinity: Given Dogmeat’s unconditional love for you as his owner, there are no specific decision qualities that increase his affinity.